It’s a sport of next generation,

reproduced Samurais’ battle by the power of IT. 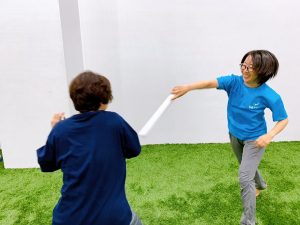 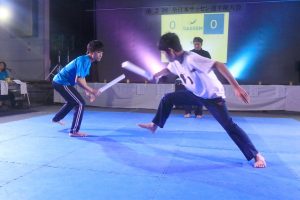 ・The number of hittings are limited to five, until he/she gets Ippon. One hit to the opponent’s body can be Ippon.

・Player wins when he/she gets Nihon(two hits) in advance, or who gets more hits after 30 seconds × 2 sets.

・Player who dropped Sassen-sword, or being out of the field, loses one hit chance.

It’s a new sport, created in Kitakyushu City, using a Sassen-sword, a sensor is built in.

You can experience a fun of real battle, like Samurais’ one-shot game. 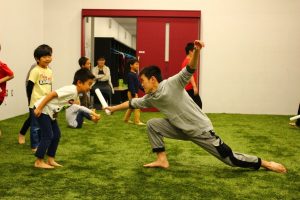 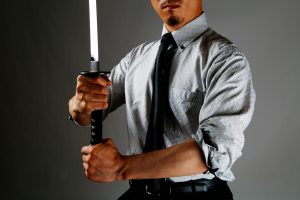 It’s a new sensation, IT technology and Samurai world are united.

A hitting sensor is built-in the Sassen-sword. Application can be downloaded from App Store for free, and smartphone can be connected with it by Bluetooth. You can count the number of hitting points.In case both hitings are at the same timing, the sensor can judge which hit is quicker. It helps human judges.

In the near future, we can make match without human judges, only with smartphones.

effect sound of both hits at the same timing (within 0.025 seconds

Sassen-sword got a patent on the 22nd of December, 2016 (Patent No. 2016-134070 sports fighting equipment).Specification of Sassen sword is as follows: 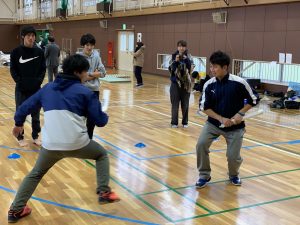 As Musashi Miyamoto and Kojiro Sasaki fought in Ganryu-jima island, Sassen can reproduce the real battle judged by one hit.

Defense and strike back! Sassen is a sport, using a split second!

Sassen is a sport, challenging with attention and consentration.

Within 30 seconds of the match, uncountable tactics and creativity are tested.

You can feel particular when you win the match of tactics.

Participation or question to the trial class is as follows.

Sassen is not only the game style, but also simple and easy recreation.

In the health course of Sassen, opened regularly at Mikuni World Stadium Kitakyushu, partichpants hit each other by Sassen-sword with excited voice (Sassen-sword is safe, good sound but no pain).

Everyone can enjoy Sassen, regardless of age, sex or handicap.

It’s a new sport, handicapped and ordinary persons can play under the same rule and conditions.

。The purpose of our activity is to keep and promote health, and everyone can join it anytime and anywhere through his/her life. 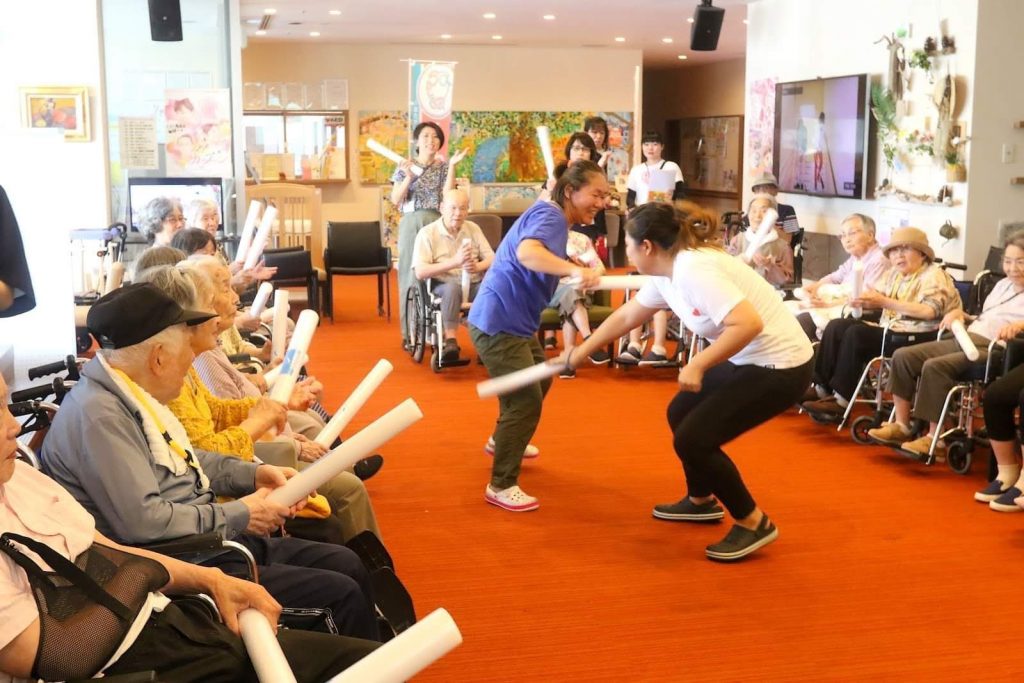 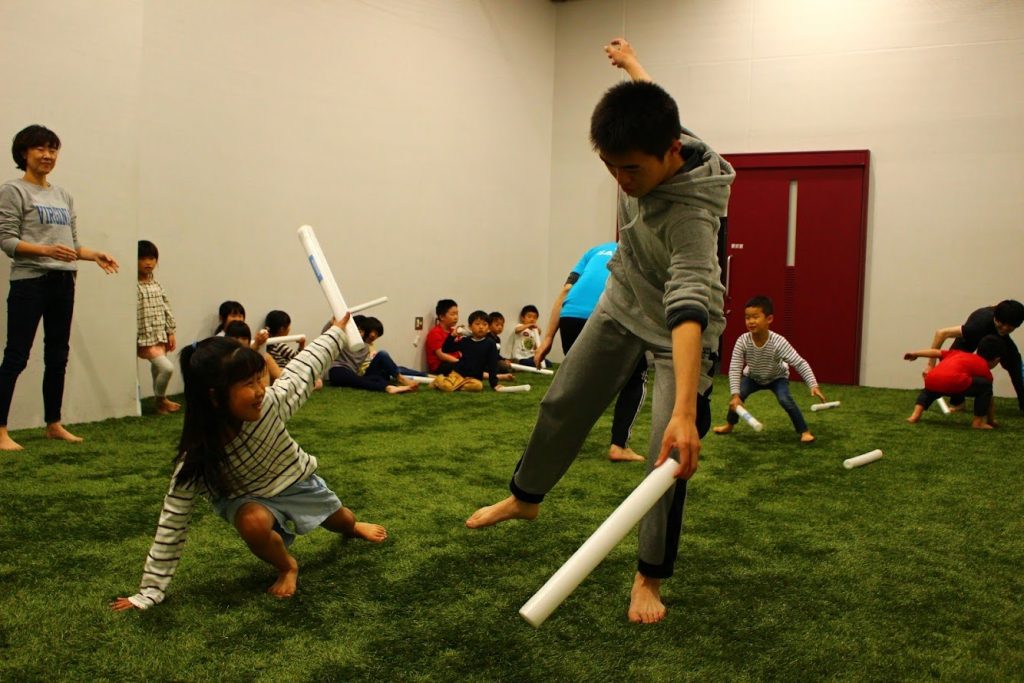 Not only participating as a member, but for the children and their family in the school or after-school, as a recreation for the people in the nursing home or disabled persons’ institution, Sassen have wide activity.

＊ To open Sassen class, it’s necessary to get license. Or, without license, “Monitor class” can be opened. Don’t hesitate to ask questions to us.

What is the origin of naming Sassen? 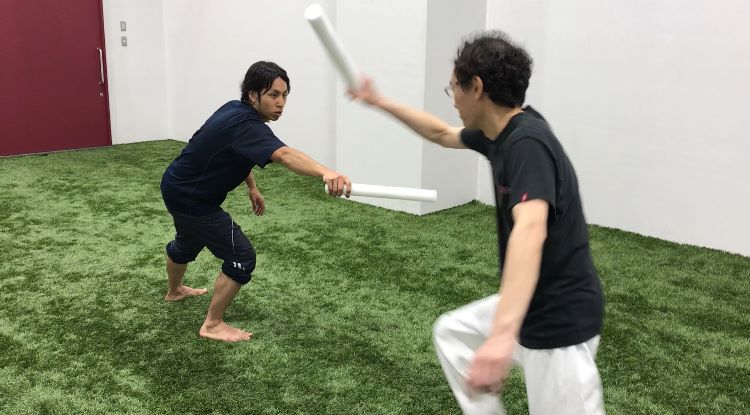 It comes from “Satsuzen”, whch means “to go flying smartly”.Beyond that, it got a hint from “Sassen”, swordplay by Musashi Miyamoto, a legendary swordman.

Sassen was born in Karate hall, located in Kitakyushu City.

Principle of the hall is to learn martial arts pleasantly, without injury.Sassen was one of the arts of self-defense, worked there.

It’s a game of “Martial arts, not to harm or injure anyone”.

。It is made of foam polystyrene, shrunk by nylon, which doesn’t hurt by hitting. Sassen-sword was made after repeated many trials and errors.

History of Sassen sword is as follows,

Recreation for family and children

We are practicing events in after-school clubs or kindergartens.

Using Sassen sword, we are suggesting a game which develops motor nerves pleasantly and easily. As everyone can confront without minding ages, it’s possible to make the games of parents versus children or grandparents versus grandchildren. 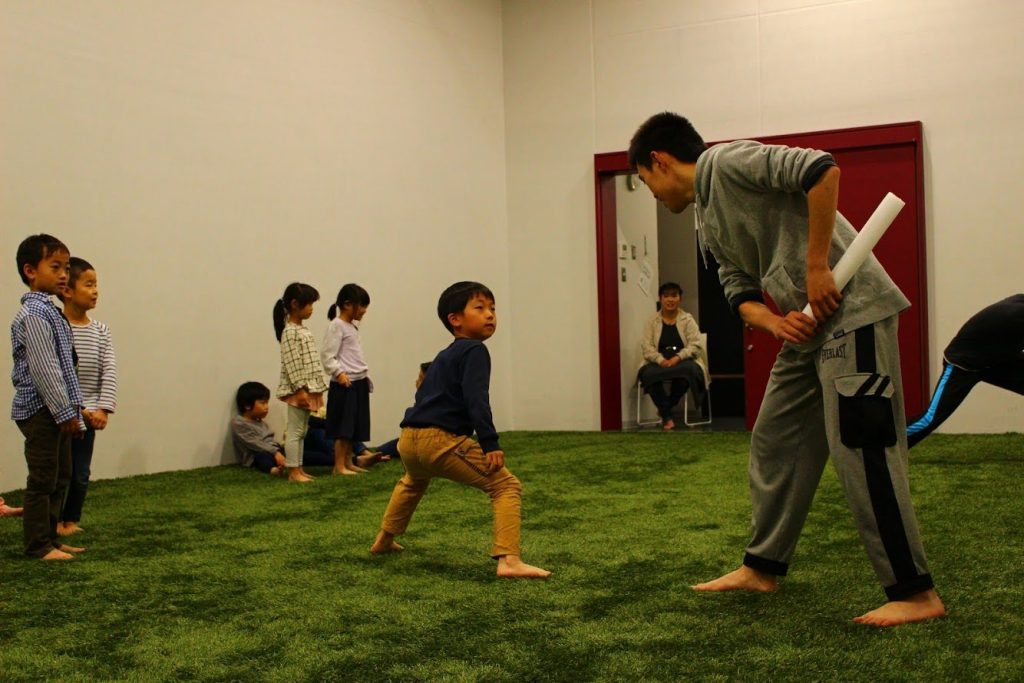 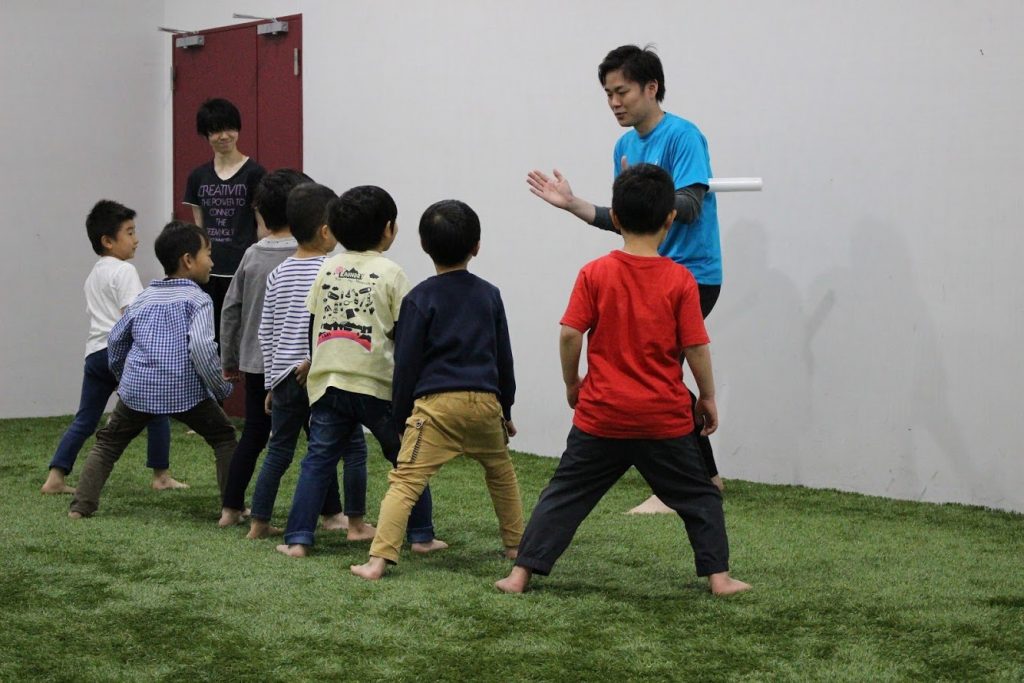 There are some repertoire, play tag or reflex movement with Sensor sword.

Recreation to be heal

For the people who want to break off the shortage of exercise and also don’t want to exercise hard.

People who want to be healthy by slight sweat.

For such people, we are opening Sassen health course.Not to strain at win and loss, but to exercise with the body balance and to do core training. 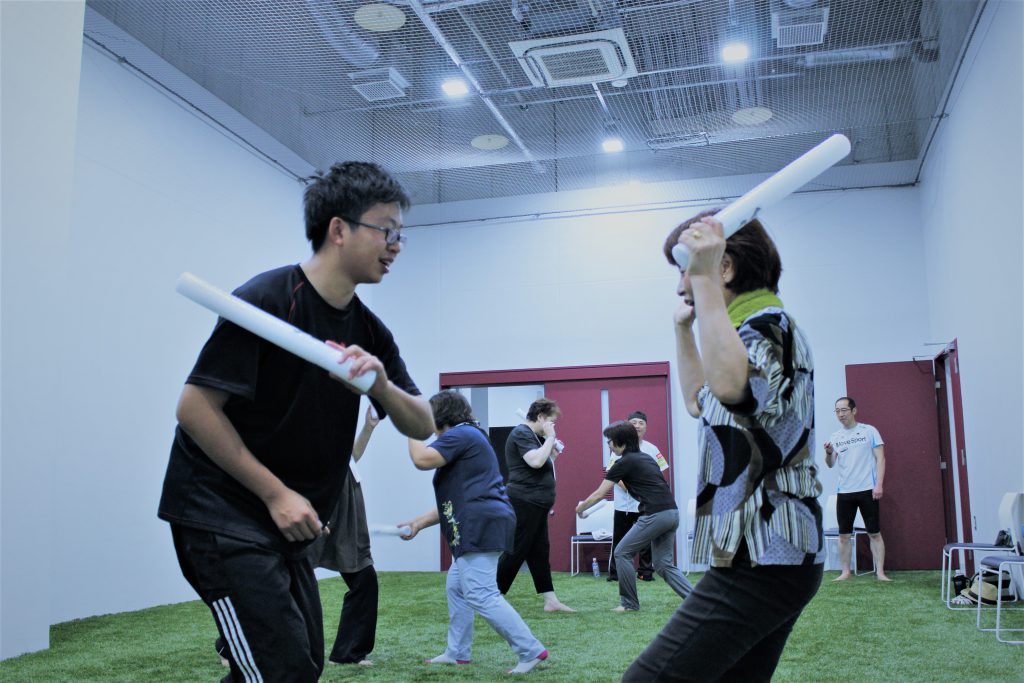 Recreation for the wheelchair players or handicapped persons

Gripping Sassen swords and changing hands from right to left can help rehabilitation of the hangover of cerebral infarction. What’s more, catching falling Sassen-sword can be the training of reflex movement. 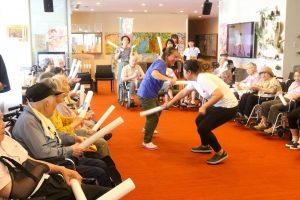 Everyone can join without any belongings.

All you need are wears for sport, towels and drinking water!

Advantage of Sassen is that everyone can play easily. Let’s experience Sassen, lifelong sport, everyone can be healthy with smile. 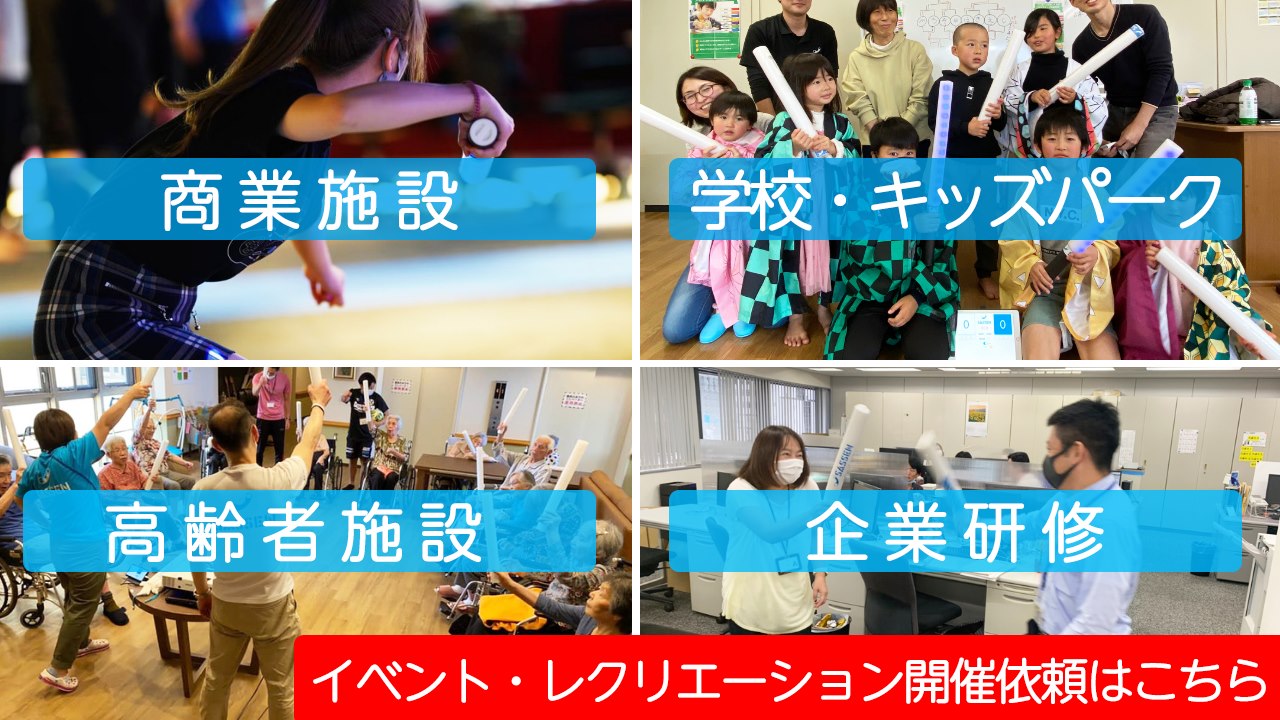